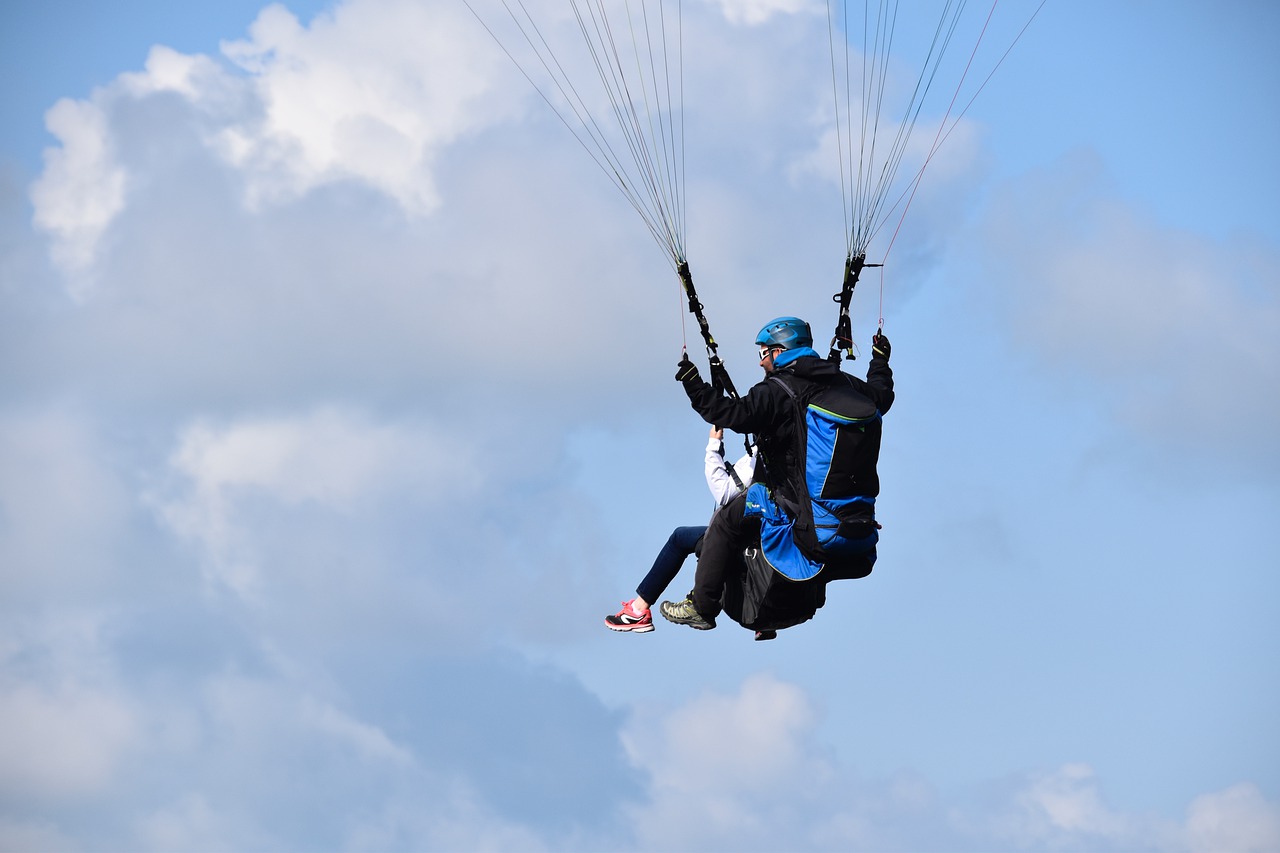 Life Lessons can come in so many forms.

I’ve always wanted to do interesting and adventurous things, so when I was in Colorado this month and saw a paragliding experience, it piqued my interest. I discussed this with the family and friends group I was staying with and had a few immediate takers join me. After some debating back and forth whether it was worth the investment, I decided to take a chance.  On the day of our flight, we had to wake up early to avoid the mountain thermals and weather that often comes in as the day goes on. My new friend and I were the second group from the house who was going to fly, the first group had already successfully taken flight.  It was really kind of strange how we met our flight instructor “RT” on the side of a mountain with a big bag on his back.

We had to hike down a wet, steep, and rocky mountain ledge in Telluride, just off the top of the gondola. There were a few times I “slipped” and was afraid of losing my footing as I traversed down to our take-off spot. Several times in my head I thought, “What in the world have I gotten myself into?” As RT was setting up the canvas, we were reading the consent waiver forms and “signing our life away”. We needed emergency contacts on our forms, so my friend and I put each other down and our phone numbers. Interestingly enough, this was someone I went to high school with who was on that trip because she was a family of our friends. We didn’t even have each other’s phone numbers on our phones.

I looked down the hill and noticed how beautiful it was off the mountainside, how tiny the town below appeared as well as the view of the picturesque mountains encased around the town. I also noticed the very steep decline and a few rocks along the way. As our instructor explained to us we would be running as fast as we could down the mountain, I started having fears that I wouldn’t run fast enough or would trip. When I asked “What happens if I trip,” I was told we would slide down the mountain. I thought to myself, “OK, how am I going to avoid that?”  I looked up and noticed how far and hard the hike back up the mountain to where I started would be. I told myself I had to take my chances if I wanted to see the beauty and enjoy the experience.

A storm was approaching, so I had little time to think about it much longer. As my flight time got closer, RT discussed how important it is to keep running until he told me it was OK, even if I thought I was in the air. So when the time came, I ran as fast as I could down that mountain and almost immediately it became very hard. As you run down the hill, the combination of the wind and forward motion inflate the wing, causing you to run against the canopy inflating, adding to the intensity of the work. My mantra at that point was “Keep running, keep running.” I kept running until RT told me it was safe and we were in the air. As I looked back I gave a thumbs up to my friend and began focusing on what was in front of me.

I leaned back and was guided by RT about the mechanics of how paragliding was like flying a plane (I am a private pilot so I was very familiar with the terms and information). He showed me steering with the handles and how we could control the outcome of the direction we were going. After that quick orientation and RT got me safe in the air, away from the mountain ledge, I was asked if I wanted to fly. Without a 2nd thought, I grabbed on. A little scared and cautious but knowing now is the time to experience what few people get to do, I had to take the opportunity. The freedom of the skies feeling creates a whole unique perspective of nature, the environment, sounds, and even your perception of the experience. In my head, I also kept saying “hold the handle tight, don’t let go” yet at the same time I continued to feel the adrenaline and rush of such an accomplishment and experience.  We circled around the edge of town, went fast, slow and I tried to take in all of nature’s beauty around me.

Unfortunately, just as quickly as I went up, it was time to come down. As we circled the field in which we would land, I noticed a few ponds that had small raindrops appearing, the edge of town so close, a road, as well as a creek at the edge of our landing field. My pilot educated me about the importance of hitting the ground running until I was told to stop. That fear again hit me, “What if I slipped, fell, or broke my leg?” I focused on the mantra, “Just run fast, run until I am told it is safe!”

I did just run fast and until it was safe, giving us an awesome landing. That landing was easier than I thought it would be. He told me he couldn’t believe I ran the way I did, as many people don’t run and they fall. I knew to be most successful, I just had to run and do it and trust my instructor.  As RT packed up his gear, he told me if the rain picked up a little more, my friend would not be able to fly. I wanted to text my friend to tell her I had safely landed but I didn’t even have her number. I recalled that luckily, we had used each other as emergency contacts, so I was able to grab the number off of the waiver before RT left. He headed back up the mountain and told me to look for them in the air in about 20 minutes.

I waited to see them in the air, the rain indeed did pick up. At 20 minutes, I heard a crash of thunder and saw the cloud of rain come over the mountain. Within a minute, it was pouring heavily as I ran for cover. I tried to text and reach my friend by phone, but nothing. I called the house we were staying in to see if she had called, but she hadn’t.  However, I was able to verify her phone number and found out I did not have the correct phone number to call her initially. I finally reached her via phone and rode back up the gondola to the top of the mountain to meet her. There I found my cold, wet, and bummed-out friend who could not fly. Not only did she miss out, but had to hike back up that steep mountain, in the pouring rain. The timing was just not right for her. She told me the hike up the mountain was rough but not to worry, she would try again another time. As I gave her my dry jacket, I described to her what a great experience it was and how she should try again tomorrow.

It turns out she tried to call me also during our time between flights when the rain started to hit, but she had my incorrect phone number. Neither one of us had handwriting each other could clearly read! Good thing no real emergency happened, as we could not reach each other.

After the flight and our whole experience, I had such an amazing feeling of accomplishment, which lasted with me. Talking about this bucket list experience is something that brings joy to me and to people with whom I share my journey. The sense of accomplishment rises up easily as I tell my story. My family and friends respond with how they are envious, surprised, and amazed that I could do such a thing. Each time I think about it, I remember bits and pieces that make for some real learning experiences and “life lessons.”

What kind of life lessons does this bring to mind for you?

I would love to hear your thoughts.

What portions of this story spoke to you about a fear you have or behavior you are afraid to give up?

How do you think this experience parallels recovery?

Don’t be afraid to take a flight, you just might get to experience so much more than you ever imagined!

Conquer food fear and overwhelm! My passion is helping guide people who are embarrassed about their struggle with food and teaching them simple habit changes that lead to a life with more energy, happiness, and the freedom to eat the foods they truly enjoy. Find a realistic food and exercise approach and remove the uncertainty about what to eat. Get started with some of the free resources on my Confidence in Eating website, especially the Bariatric Success Guide., Emotional Eating Quiz, and Binge Eating Quiz resources. I offer telehealth nutrition programs so you can live your life knowing how to nourish your body, mind, and soul.

This website uses cookies to improve your experience while you navigate through the website. Out of these, the cookies that are categorized as necessary are stored on your browser as they are essential for the working of basic functionalities of the website. We also use third-party cookies that help us analyze and understand how you use this website. These cookies will be stored in your browser only with your consent. You also have the option to opt-out of these cookies. But opting out of some of these cookies may affect your browsing experience.
Necessary Always Enabled
Necessary cookies are absolutely essential for the website to function properly. This category only includes cookies that ensures basic functionalities and security features of the website. These cookies do not store any personal information.
Non-necessary
Any cookies that may not be particularly necessary for the website to function and is used specifically to collect user personal data via analytics, ads, other embedded contents are termed as non-necessary cookies. It is mandatory to procure user consent prior to running these cookies on your website.
SAVE & ACCEPT
×
×